‘Single Not Searching’: LisaRaye On Entertaining The African Diaspora In Her Upcoming Film

LisaRaye is playing a woman searching for love in Single Not Searching, a romantic dramedy bringing together African American and native African stars together. Taking place in Ghana, the film highlights the best of the diaspora. As our sister site Travel Noire points out, the collaboration is especially poignant during Ghana’s Year of Return campaign, in which the country welcomed all members of the diaspora in search of their roots.

LisaRaye and director Michael Djaba told Shadow And Act what it was like filming Single Not Searching and what the film means to Black viewers around the world.

Djaba said the idea for Single Not Searching came from a conversation he had with his CEM Media Group business partner Cynthia Stephens. Stephens, who is African American, and Djaba, who is Ghanaian British, realized there was a lot of overlap in the types of romantic films they loved.

“We noticed that even though our backgrounds were different, we had many favorite films in common,” he said in the interview. “That conversation quickly developed into the decision to create a romantic film to show Africa that I know the world has not yet seen through the lens of an authentic modern African experience.”

Djaba said the film’s relevance comes in how it ties the African diasporic experience together.

“I happened to be in Atlanta last year during the Global BLM protests that were sparked by the murder of George Floyd,” he said. “Seeing the pain and passion of our African American brothers and sisters broke my heart and I knew creating this movie was a way of letting African Americans know that Africa (in particular Ghana ) is home to them and introducing the culture to them in a light-hearted way while at the same time squashing all the negative stereotypes that have been portrayed of Africa for years.”

He also commented on Beyond the Return, the Ghanaian government’s long-term plan to keep borders open to the African diaspora.

“Beyond the Return was the continuation of the President of Ghana’s successful initiative, The Year of Return. It was scheduled to take place throughout 2020, however it was halted due to COVID,” he said. “Fortunately, Nadia Adongo Musah, The Deputy Director of Diaspora Affairs in Ghana saw the potential of the Single Not Searching Movie as an opportunity to let the world know that Ghana is back open for business.”

The film’s cast and crew came from across America and Africa, including LisaRaye and Brely Evans from America, Nikki Samonas and TooSweet Annan from Ghana, Toyin Abraham and Chioma Akpotha from Nigeria, Eddie Watson from Liberia, Tebogo Thobejane from South Africa, and Forbes 30 under 30 honoree Sasha Vybez from Uganda as the film’s director of photography. Interns from Ghana’s Gen Z organization The R’ajwa Army were also on board in order to give them priceless experience working on a feature film.

LisaRaye, who plays main character Angela, told us about how the film highlights the type of collaborations that should happen between Africans and African Americans in the industry.

“This project was interesting to me because it combines African stars with Hollywood stars. The cross-promotion and integration of us African Americans and our sisters and brothers in Africa is what collaborations should be,” she said. “We learn from each other, blend and teach each [other] what the different cultures do. It was beautiful to see how proud people walked around, how strong they are and rich in faith. The hustle was real too.”

LisaRaye talked about why she had so much fun playing Angela, a woman who, according to an inside joke from set, “was looking for The Chocolate.”

“My role was so much fun because my character Angela is a cougar…sexy, older and funny, just like me except the cougar part,” she said. “She wasn’t afraid to be out and about, to find lust and hopefully love in Ghana…Angela had some great outfits that fit like a glove and the vibrancy of the colors in the film and outfits made you feel alive. Atlanta-based fashion stylist Fiskani from the Ivy Showroom flew all the way from Atlanta to Ghana to style this movie.”

She also described what it was like to wear traditional West African clothing in the film.

“One of the stylists created my Gele (a head tie that is commonly worn in many parts of West Africa) right on top of my head. I always thought it was fabric but this one felt like paper,” she said. “So decorative and stylish. This was the most color I’ve had in awhile since I [have] only [worn] white for over 18 years!”

Viewers will love the movie, she said, because of its love story and humor.

“I think everyone will enjoy this romantic comedy about love. Everyone loves to laugh,” she said. “The different accents that [are] usually considered strange or non-existing blend very well. This is going to be a new normal. Ghana is beautiful with lots to do, taste, see and learn. Great for tourists. I’m definitely coming back.”

Check out exclusive behind-the-scenes photos below; 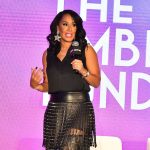